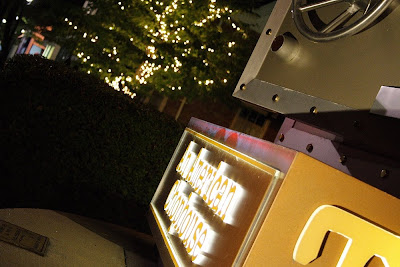 does that say an american chophouse?

Cool shot. I was a Friday night regular there for about 2 years when they first opened.

I stopped going when the original chef and bartenders left (I did not care for their replacements.)

I have no idea what the place is like now. Can't really afford it anymore either.

Lily, yes, "An American Chophouse." The name of the restaurant is "Tellers." It used to be a bank, and it's in a beautiful old bank buidling - think Michael Banks in Mary Poppins being taken to the bank by his father to deposit his tuppence when what he really wants to do is feed the birds.