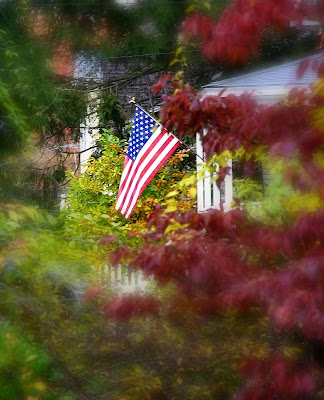 I know I've taken this same shot before, during the summer...but I got in my car this morning to head for work, and the flag just struck me really strongly.
I have to say, I would never vote or not vote for someone based on their race or color...but the fact that an African American has been voted to the American presidency is, for me, the cherry on the top of the election outcome. It makes me SO PROUD of this country, and of the American people, that they were able to make this decision, in spite of an issue that since the beginning of our nation's history has BEEN an issue, however wrong. I hope I'm making sense :-) *I* know what I mean. I just wanted to say I'm Proud of America today...and seeing the flag waving this morning just epitomized that for me.
Posted by Fashion Schlub at 9:46 PM

Outstanding shot of the red white and blue. Well done and Thanks for sharing!

Agreed. I'm glad this country was able to finally overcome one of it's shortcomings.

The newspeople that night kept saying how great it was etc., while I kept thinking, 'well, it's about time'...but they can't say such things, I guess. Hopefully, too, women will be up there as well.

This was the first time I voted even though I have lived here for many years. I became a citizen a couple of months ago and I am so proud to call myself an American and to have been part of the voting process. It was an incredible day.